On 17 November 2021, F.A.S.T. – Fieldlab Autonomous Sailing Technology was officially launched. A research project where Captain AI will play a leading role in integrating and testing our Captain AI Autopilot software on the patrol vessel provided by Damen Naval, part of Damen Shipyards. Over the next two years, Vlissingen harbour and the port of Rotterdam will be used as a testing ground for soon to be autonomous vessel. The project is a collaboration between various other parties, including the Province of Zeeland, Municipality of Vlissingen, HZ University of Applied Sciences, TU Delft, and local companies, such as Kloosterboer, Vlaeynatie and Zeeland Boten. 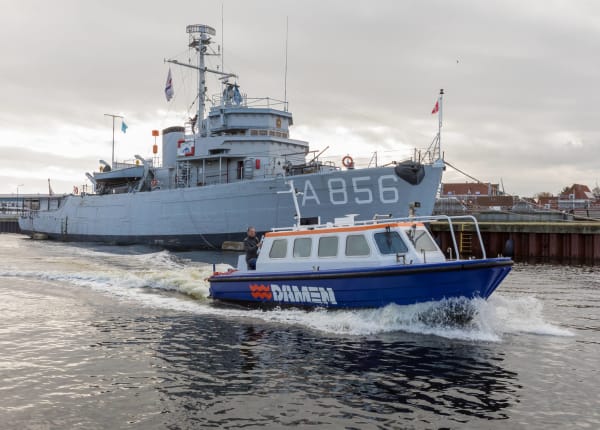 Project leader Jochem Nonhebel from Damen Naval proudly presented the main protagonist of the F.A.S.T. project: the Damen Polycat built at Damen in Hardinxveld-Giessendam in 1990. The vessel will be refurbished and converted in the coming months. The two diesel engines will be replaced by two electric engines that will be at least as powerful as the current ones. Cameras, sensors, radar, Lidar, GPS equipment, wind and speed gauges are also being installed; these will replace the eyes and ears of the helmsman.

“This project is just the beginning of much bigger developments. Ultimately, we want to develop this technology in such a way that we can also implement it on large ships. For example, automatically mooring a ship and avoiding objects,” said Jochem. “In a complex location such as here in Vlissingen’s inner harbour, you have to deal with large and small ships, swimmers and other water users. It’s not easy to identify all the objects in the water, especially for a computer, so we are going to add all kinds of technology to the boat. For safety reasons, there will always be someone on board to make sure that intervention can take place if necessary.”

The F.A.S.T. project received a grant of €1,174,846 from the European ERDF programme as part of the European Union’s response to the Covid-19 pandemic. The condition is that the project contributes to a green, digital and resilient recovery of the South of the Netherlands and that it stimulates innovation within the SME sector within the region. In addition, the project has also received contributions from the national government and the participating parties. Provincial Executive Harry van der Maas handed over the cheque for the European subsidy money to Jochem Nonhebel.

“I am proud to be able to hand over this cheque. The Province of Zeeland is very impressed with all the parties who are working on this ‘living lab’, this testing ground in the harbour of Vlissingen. A lot of energy has been put into it by all parties and I would particularly like to thank Damen as the main driving force behind the project,” said Mr Van der Maas.

Jochem concluded his presentation by saying, “This is the starting point of the project and we are proud to share it here. And of course we are curious to see where it will all lead, so we will keep everyone informed of developments on a regular basis.” The F.A.S.T. ship does not yet have a name. Therefore, together with the Zeeland ‘Huis van de Techniek’ [a local technical education development organisation], a contest is being held at primary schools in and around Vlissingen.

This article was originally posted on the Damen Naval website